from a long and skinny scrap to the easiest tie EVER

I have two little girls who love to wear pretty things.  It can be so easy to get carried away with making pretty things for enthusiastic little girls and neglect to sew for my little guy.  Also, boys clothes are all about well-tailored details, right?  I don't have the sewing chops to tackle most of that stuff.  I did really want to make SOMEthing for my little boy for Easter since I had already made dresses for the girls (I'll probably post pictures of those another day).  I found a long skinny scrap of fabric in stripes of orange and a grey-blue (his two favorite colors), and I had a brainstorm of how I could make it into the easiest tie EVER. 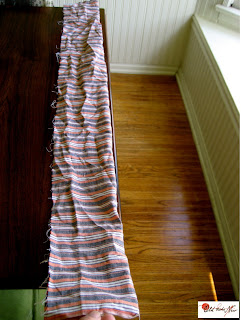 My scrap was about 10 inches by 40 inches, which was the perfect amount for my 2 1/2 year-old son (I think 9-12 inches for width could work, depending on how wide you want your tie/how big your guy is, and for a full-sized tie, I would just measure the length of a real tie).  I think it may even fit him next year, but if it doesn't, I won't care because this tie is SO easy! 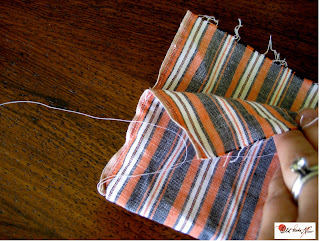 I folded it in half length-wise and sewed up the narrow ends about 3/4 of the way, starting at the fold. 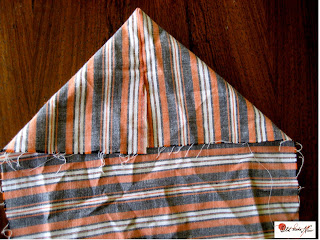 Then, I turned each of those ends inside out and flatted them into triangles with the seam down the middle and moved to the ironing board. 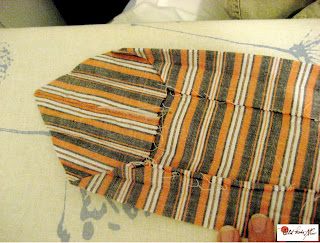 I folded and pressed a hem along the length of the tie that was about an inch at what turned into the wide end and an inch and a half at the narrow end.  The amount that you fold could definitely vary depending on how wide you want your tie. 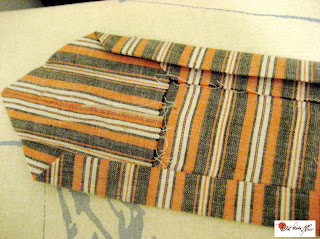 Then, I made another fold of half an inch along the length of the tie to match up with the end of the previous fold. 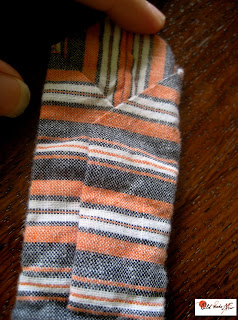 I ironed one last fold along the tie, having the two sides cross over each other along the middle.  I made sure that the tie was definitely a bit wider at one end (not quite twice as big) and nice and crisp before sliding fusible webbing tape in to keep both flaps in place and ironed one last time.  At this point, if I hadn't started the day before Easter and still had a dress for myself on the docket, I would have hand-stitched the seam as well.  I will probably go back to that...some day. 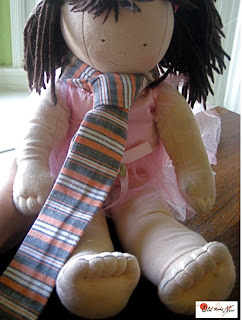 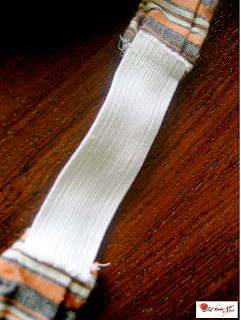 So, I cut it right behind the doll's head, leaving the knot in place and added a 4 inch strip of elastic (this measurement was based entirely on the ratio of the doll's neck to my son's as measured by the neck measurement of his collared shirt...it could definitely vary) to the back of the neck.  The tie stays tied, but has a more authentic look than a clip-on.  It's actually easier to put on than the clip-on that he got as a gift from his aunt last year, and the elastic hides right under his collar.  A bunch of people told me that they couldn't believe he was wearing a real tie. 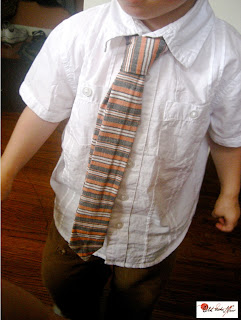 Thankfully, he's not THAT big, yet.
My husband was kind of jealous that he didn't get a tie.  I wish had more of this striped linen!
Posted by Natalie at 5:02 PM