from chalk cloth scraps to an erasable memory game 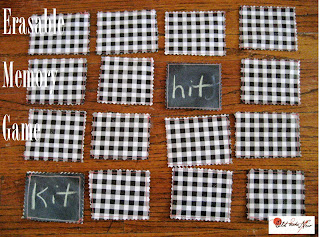 It's probably not uncommon, but my four year-old daughter learns well when playing games.  She started getting interested in the words to label things around the house as they came up in context.  At dinner, we would have little scraps of paper with chair, spoon, etc. on them, which she naturally wanted to turn into a memory game.  Of course, she would want to change the words out constantly, and we ended up trying to save really tattered pieces of paper or ripping up lots of it to make squares.  I decided that an erasable, durable memory game would be great.  We could tailor it to what she is learning in pre-k, different end sounds, blends, whatever.  I had a decent-sized scrap of chalk cloth leftover from another project, so I cut it up along with a scrap of oil cloth in a gender neutral pattern. 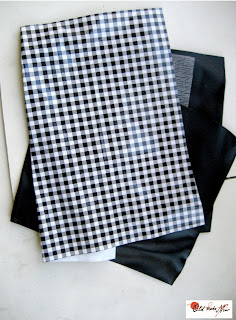 I used pinking shears to give it an interesting edge, but you don't have to since chalk cloth and oil cloth don't fray.  You could try regular fabric instead of the oil cloth, but the weights are so different that it might be wonky. 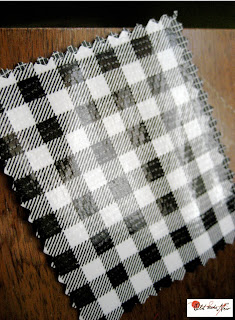 My oil cloth scrap was pretty small, so I let its size dictate how many game pieces we made we ended up with 16 pieces that are approximately 3 inches by 3 1/2 inches.  They are big enough for small words, letters, pictures, or numbers. 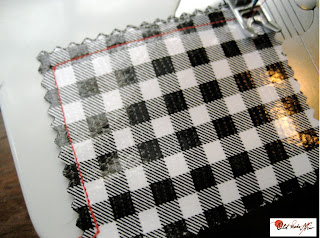 I put wrong sides together and stitched close to my edge.  I trimmed them up a bit with my pinking shears to make them look neat. 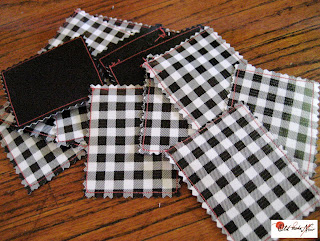 I had my stack ready in no time. 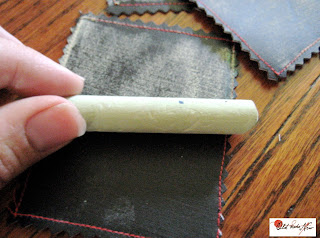 Chalk cloth is supposed to be seasoned before you write on it with chalk.  Just rub the side of a piece of chalk on it and wipe it off.  This way, the first thing you write won't get etched onto the cloth.  I used a microfiber cloth to clean them up, which worked out great. 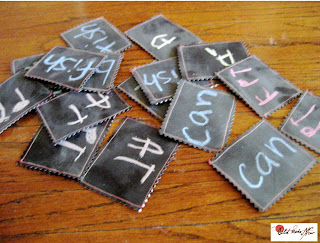 My daughter helped me write some easy words on the cards, and we were playing in no time. 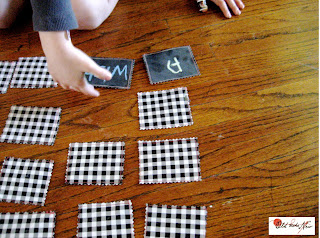 She's already thought of a bunch of easier ways to play the game with her 2 year-old brother and sister.

We did a round of words that end in -it.  She does a great job thinking of those rhymes!  I might have to sneak this game into the car to use at restaurants.  The possibilities for these cards are endless!
Posted by Natalie at 4:23 PM